Many Vietnamese people left Vietnam for political and economic reasons.  In the beginning, people were leaving because of political reasons such as if someone was part of the military against the Việt Cộng that soldier will be sent to re-educational camps. Their life would be miserable as second-rate citizens. Also if those soldiers were northerners who migrated from the north to the south in 1954.  They were considered traitors.

Later as the social and economics of life in Vietnam became a desperate situation, people left because of economic reasons.  They were seeking a better life, better jobs, and a better standard of living.

An estimated of about two million Vietnamese left their country by any means between 1975 and 1995. An approximate 1,643,000 Vietnamese settled in different countries and almost 800,000 made it safely by boat between 1975 and 1997. Many who traveled by boat failed because of pirates, lost at sea – hunger and diseases, and/or severe storms.
There were many ways to leave Vietnam: American Navy fleets or with American Planes in 1975 when the war just ended, as Chinese citizens, illegally, and through immigration programs.

The first waves of people leaving Vietnam were people who have friends or relatives working for the Americans and/or military and political-related personnel.  In 1975 when the war ended, the country was in chaos.  People were scattered everywhere.  If you know someone in the military, political, or US professionals related personnel, you have a chance to leave Vietnam.  There was no one there to monitor or stop you from leaving.

My family had the opportunity to leave with my grandparents at that time but we chose not to. My grandparents and more than ten family members left Saigon on a Navy fleet while my other relatives left Saigon as an evacuation of Operation Frequent Wind. They were among the 140,000 South Vietnamese who left Vietnam as refugees during the first wave.

In response, China launched a brief, punitive invasion of Vietnam in 1979. The Chinese claimed that the invasion was to teach the Vietnamese a lesson and not aimed to take over Vietnam.  The lesson appeared to be directed against Vietnam’s recent invasion of China’s ally Cambodia, Vietnam’s treaty with China’s adversary, and the U.S.S.R. More than 4.2 million ethnic Chinese in Southern Vietnam were prompted to leave. Approximately 180,000 departed Vietnam.

After 30 days of the war, China withdrew its military.  To this day, both sides of the conflict describe themselves as the victor.  The war resulted in the discrimination and consequent migration of Vietnam’s ethnic Chinese.

From 1976 to 1979, the 2nd wave of people leaving Vietnam was through the Chinese immigrants living in Vietnam.  All Chinese were allowed to leave Vietnam legally on the condition that they have to hand over all their belongings, deeds to their lands, homes, shops, and anything else to the communist government. Lots of Vietnamese disguised themselves as Chinese so they can leave as well.

Many of these people fled as “boat people” who eventually resettled in Asian communities in Australia, Europe, North America, or went back to China.  In 1978, our family was among the Chinese who fled Vietnam.  We disguised as Chinese with fake Chinese IDs and names. Visit “My Journey to America – The Plan” for the start of my “boat” experience.

By the end of June 1979, leaving Vietnam was no longer legal for the Chinese.  On June 19, 1979, boat TG1096 was the last boat leaving Vietnam legally. Steve Ly, my brother-in-law, and his family left all their assets such as home and land behind.  They boarded the last legal boat TG1096 out to sea. There were ten members of his family which consisted of 8 kids and his mom & dad.  He was 15 years old.

The boat was approximately 19 meters long and carried 412 people.  The number of people outweighed the boat’s capacity of passengers.  The boat was barely staying afloat.  They were fortunate and drifted out to sea for only 4 to 5 days and were picked up by a Malaysian ship and placed on an island called Galang in Indonesia. It was considered to be the sister of Pulau Bi Dong where other Vietnam refugees were held.

Any wave of boat people after June 1979 who left without permission would be considered to be illegal.  The escape attempts became exponentially difficult.  Not only did the refugees face pirates in being raped, pillaged, and lost in the open sea but the refugees also have to deal with being captured and imprisoned by the Việt Cộng.

Many Vietnamese sneaked out in the middle of the night to rendezvous with a ship.  When weather permits, sometimes there would be a ship waiting for them.  Otherwise, everyone turned around and went home for the night.  Other times, it would be a bust and the police were waiting for them.  People still came in droves.  They paid money in gold so that they can have an opportunity to escape taking great risks of being caught by the government or pirates at sea. 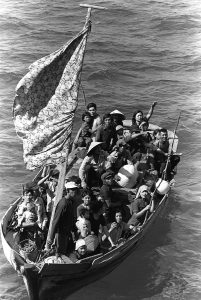 My uncle, Kỳ Nguyễn, escaped 7 times illegally. Six of those seven times were unsuccessful. Each time it would cost at least $100 or more. One of the seven times, my uncle was the boat operator so he did not have to pay.  The refugees would meet in the middle of the night at the assigned location by the beach.  A boat would be ready for the refugees to board.

Through my uncle’s escape attempts, several times he was caught by the police. Sometimes, the government set up an escape scheme.  Other times, the tide was not right or there was a bust or tip to the government about the trip.

After relentless attempts, my uncle triumph on his 7th time. One hundred and seventy people floated three days and 3 nights in October of 1982.  They found themselves on an island nearby in Malaysia, Paulau Bidong refugee camp. At that time there were 25,000 people living there.

We received letters from families in Vietnam about my uncle’s successful escape and his whereabouts. My family sponsored my uncle and he arrived at our home in Seguin, Texas Christmas 1983.

My uncle’s son named Châu (my cousin who was like a brother to us) the age of 13 also escaped on his own in 1987.  They were lost at sea for fourteen days. Châu was transported to a Thailand refugee camp for many months while waiting for sponsors.  He was sponsored by my family in 1988.

By 1995, all the countries stopped sponsoring Vietnamese refugees.  Anyone who left would be deported and sent back to Vietnam.

Another product from the war was Amerasian.  Amerasians were children consummated by the American soldiers and Vietnamese women.  Many soldiers did not know that they had children until many years later after the war.  The Amerasians had a hard time living in Vietnam. They suffered discrimination, poverty, neglect, and abuse. There were about 23,000 Amerasian and 67,000 of their relatives entered the United States under the America Homecoming Act or Amerasian Homecoming Act which was passed in 1988.

There were two other ways of leaving Vietnam in search of democracy.  The first was the Orderly Departure Program (ODP) from 1979 to 1994. In this program, the refugees were asked to go back to Vietnam and waited for an assessment. If they are eligible to be resettled, they would be allowed to immigrate.

Within the subgroup of the ODP program, Humanitarian Operation (HO) or Humanitarian Program for Former Political Detainees was formed. This program allows South Vietnamese who were involved in the former regime or worked for the United States to also immigrate to America. One of my uncles (my father’s younger brother) was among many south Vietnamese soldiers to immigrate with their families to America through the HO program.

The second way was being sponsored by the Vietnamese who left Vietnam in earlier years. The family can be sponsored and flown over by airplanes.  The sponsored family must be immediate family such as parents and siblings under 18 years of age.

Since 1994 when the embargo was lifted for trading between the United States and Vietnam, Vietnam has improved economically and financially. Tourism brought growth and structural improvements. Life in Vietnam has rehabilitated tremendously.
Currently, Vietnamese civilians may travel freely internationally to other countries at any time as long as they have funds to support their travels. Education abroad is also allowed.

I am glad to have had the opportunity to witness the changes and growth of Vietnam during my lifetime. Vietnam is a beautiful country rich with many natural resources along with a vibrant culture and amazing adaptable hard-working people.

I created Phở Queen Cooking to share my joy in Vietnamese culture and foods. I enjoy sharing them through my demonstrations. Join me for a free and fun experience of Vietnam.

If there are questions or thoughts that you would like to share, please leave them in the comments below.