I remembered whenever the Malaysian guard visited, my mom would ask for rice and sweet bread. I remembered eating a huge tub of butter until I was sick. From then on, I got pretty sick of butter.

On the island, once to twice a month, an official would visit us with food such as rice, meat, and vegetables. My mom would sometimes ask for rice and sweet bread. Occasionally, they would also bring butter. One time, I got greedy and ate a huge tub of butter and my stomach did not like me very much. From then on, I shied away from butter.

We were given a certain amount of rice and meat monthly. The noodles were available every two weeks. Because our family was full of children, we did not consume all the given rice. My mom would save the leftover and sold them. With the extra money, she bought more vegetables and extra different food for the family to eat.

In the beginning, there were nowhere toilets. They went into the woods and went to the bathroom and used leaves to wipe their butts. Later as more people moved to the island, outhouses were built.

As the months passed by, the island was populated with more refugees. More boat people arrived. Within five months, the quality and the beauty of the island began to degrade.

Everyone was not taking great care of nature. We found the sand on the beach being polluted with feces and trash. Almost everywhere we walked was littered with trash and feces. I was sad to see the beauty of the beach start to diminish. The water became diluted. We no longer can swim in the ocean without bumping into some kind of trash.

It was great to have seniority over everyone who came later. We were the “Robin Crusoes” as my dad put it and the pioneers of the island. However, we could no longer enjoy the beauty of what nature had offered us. Somehow politics, power, and greed were introduced to the environment. The island became overpopulated. The atmosphere no longer felt the same as we first step foot on the island. The innocent time and the fun time escaped us like a breeze on a mid-summer day.

When we first arrived, my parents submitted the paperwork for sponsorship in America. Our grandparents left Vietnam and arrived in America in 1975. They became our sponsors. My mom wrote to my grandpa and grandma but we rarely received any correspondence from anyone other than the officials.

There was the main building that had a huge speaker intercom. Monthly, there would be an announcement of which family has been sponsored. My parents and cousins were always listening for our names to be called next. One fine morning in October, our names came through the speakers. The sponsored paperwork was finally completed. The officials notified my parents and told us to prepare to leave.

Hearing the great news, my family was overjoyed. I was relieved that we were leaving the chaos and the dirty part of the island behind. I felt sorry for those who did not have a chance to enjoy and treasure what I had. The island could still be a great place to be but the people living there have to work together to make it happen. To this day, I still wonder how the island had held up with thousands and thousands of immigrants passing through since July 1978. 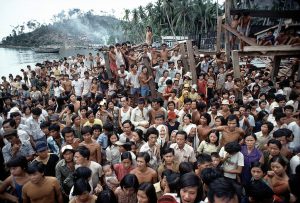 My family and I packed up and were ready for our journey to America by the end of October. We were ready and excited to meet our family in America. My parents sold our home on the island to the next group of people. My parents said many goodbyes to the people they made friends with while we were there. We did not know if we will ever see any of those people ever again.