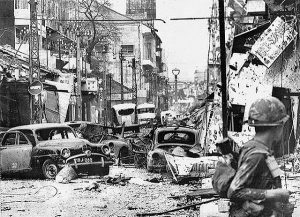 In 1968, Vietnam was in the midst of the Vietnam War.  During the Tết offensive, the Việt Cộng tried to invade Chợ Lớn in Saigon, the largest Chinese Chinatown district in Vietnam, on the week of May 5, 1968.  The Việt Cộng launched a series of rocket and mortar attacks on Chợ Lớn.  The attacks were coming from the neighboring city called Cần Thơ 169km southwest of Saigon. Cần Thơ was annexed by the Việt Cộng. Everyone who lived in the Chợ Lớn district ran for cover while my mom was searching for the nearest hospital to deliver me.

My parents lived in the Bình Thạnh district near my paternal grandmother, Bà Nội.  My maternal grandparents, Ông Bà Ngoại, lived in the Chợ Lớn district.  Bình Thạnh was northeast to Chợ Lớn. It took my father ½ hour by motorcycle to travel one way between the two districts.  Bình Thạnh was not yet touched by the Tết offensive attacks. My parents did not have a television or telephone so therefore my family was not aware of the Việt Cộng attacks in Chợ Lớn.