Living with Bố and Mẹ Đức

During my first ten years, I lived mostly with Bố (dad) and Mẹ (mom) Đức, my godparents, in a simple and modest home. In an average American home, there is a living room, kitchen, dining room, bathrooms, bedrooms, and/or other individual rooms. Each room is divided by common walls. In the 1970s, the houses in Vietnam were structured differently. In an average Vietnamese home, there were two large rooms. The front room served as a bedroom, living room, and family room. The back room was for the kitchen and bathroom. Other than the size and different square footage, most of the homes had a similar layout.

Bố and Mẹ Đức’s home had one floor and a loft. On the first floor, we had two large rooms. The front room was utilized as the bedroom, the family room, and the living room. We had a full-size bed for Mẹ Đức and me by the front door. There was a small twin-size bed in one corner of the house for our cousins.

The loft was a bedroom for Bố Đức.  A flimsy ladder served as an access to the loft. I was intimate with the steps and the hard ground at the bottom of the ladder where I often landed on my butt.

The second room was served as a kitchen.

We also had a squatting toilet with a door in the back corner. The shower and other water drainage flow through a large drain toward the back of the kitchen. Taking a shower was simple. I used a water hose to have quick showers or filled a big bucket of water for a bath. I washed my body and hair with a bar of soap. Dirty clothes were washed by hand and hung up to dry on clotheslines in the front of the house.

There was no stove, oven, or refrigerator. We cooked with wood and coals in several cooking burners. Cookies, cakes, ice cream, yogurt, and many Vietnamese desserts were special treats from bakeries.

We had fresh produce or meat every day from the market. Our simple meal consisted of soup, a stir-fry, and/or sometimes meat or fish with our main filler, rice. Except for the pickled vegetables or brine meat, there was rarely left over for the next day because there was no refrigeration to keep food overnight.

You may wonder when does phở, the famous Vietnamese beef rice noodle soup, came into the Vietnamese diet? I did not have phở often. It was primarily a treat when we went out and we rarely went out to eat.

Unlike many traditional families with siblings, I had the experience of being the only child during my first 10 years of life. I was treated like a princess and was a 100% spoiled kid including cavities and all.

Both Bố and Mẹ Đức loved me very much. When I was in kindergarten, Bố Đức picked me up from school every day and carried me home on his shoulders or back whether it was rain or shine.  I was his little girl.  I was practically the only child.  Everything I asked for I got.  When I did not get what I wanted, I cried and had a fit.  I often wanted my cousins’ toys.  Of course, no one let me play with their toys.  The tears and the tantrum broke loose.  All the nieces got in trouble and were spanked because they made me cry.  I always got my way. =)

One afternoon my biological father visited.  I was having a tantrum.  My father spanked me right then and there with his belt.  From then on, I was very fearful of my father.  His voice was like thunder in my mind.  Every weekend my father picked me up to visit my family and siblings.  My father and family brought me down to earth.  Being with a big family reminded me how good I got it with Bố and Mẹ Đức. I learned to appreciate my godparents even more.

Bố Đức was sick pretty often.  He got worse after the fall of Saigon in 1975.  He had to go away to a Vietnamese re-education camp.  I did not understand why and I did not ask.  I learned that I have to do what I was told and never ask questions to the grown-ups.  Bố Đức made me a silver bracelet while he was at camp. The bracelet was my favorite jewelry piece.  After he came back from camp, he became ill.  He slowly became thinner day by day. He was so thin that I could almost see his heart beating against his bare chest.

One afternoon in 1976, I came home from school.  I saw a crowd of family members surrounding Bố Đức’s bed.  I was not sure what was going on.  As I approached, my family parted into a pathway revealing Bố Đức.  I walked toward him and said, “Bố Đức, I am home.”  He acknowledged my presence and died that afternoon.  I didn’t understand death and I didn’t understand what had happened.  Everyone cried so I cried too.  He waited to see me one last time before he left this world.  I was a lucky girl to have such a loving person in my life.  From then on, I wore the bracelet he made for me until I was 15 years old when it no longer fitted my wrist.

Mẹ Đức took great care of me. We kept each other company when Bố Đức passed away. Even though I was too young to notice the details, life was not the same when north and south Vietnam united. I could sense something was different. There were rumors and whispers of what was going on with the new government. Everyone was paranoid about who should play with whom and what I should say or not say in public. Rumors were floating that family members in the neighborhood were taken away to re-education camps or disappeared. I was protected by Mẹ Đức and skidded obliviously to the tensions, the floating rumors, and the world. 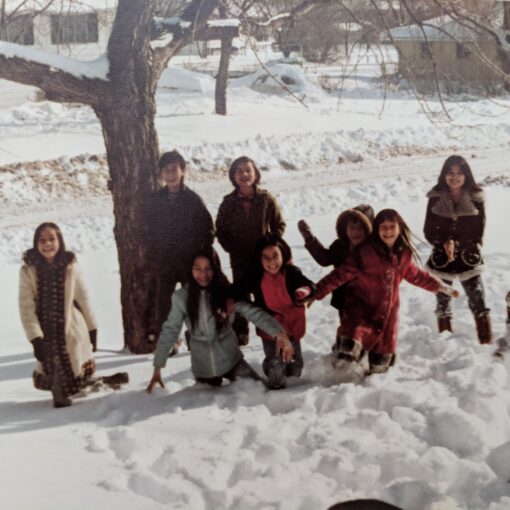 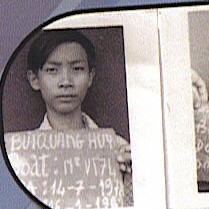